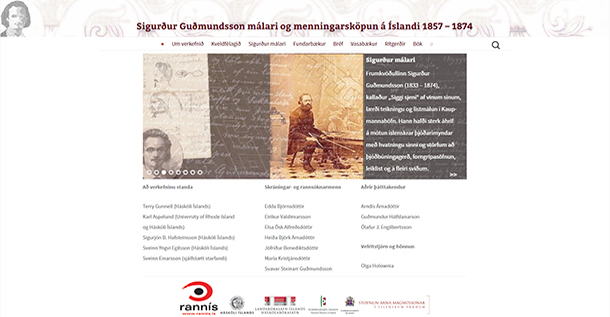 The central aim of the project was to define the intellectual genealogy and long-term cultural influence of the culture–creators of the Icelandic “Evening Society” (1861 – 1874), with emphasis on the widespread cultural influence of Sigurður málari (‘the painter’) Guðmundsson, a powerful advocate of vernacular culture in Iceland. As part of the project, light has been shed on the movement of ideas through the network of Icelandic intellectuals from their initial sources from both inside and outside Iceland. The project then enables users to trace these ideas as they move from person to person, by means of reading, writing and association. The aim was thus to provide as accurate a map of the movements of theories and ideas as is possible and thereby establish an intellectual genealogy of the elements of Icelandic culture creation the Evening Society was involved in. The hope was to make it possible to analyze also in some detail, the long-term influences of this group. By placing the Icelandic intellectuals within a larger context of intellectual developments and trends on the continents both east and west, the investigation aimed to provide a view of the intellectual history of Icelandic romantic nationalism as part of larger international waves of thought which were moving across western industrial society at the time. Our hope is that it helps users to place the Icelandic writers, poets, educators, priests and artists involved in a new and clearer international context. It should also have value for those working on similar themes in other countries.